Unlocking the RPK-74m In Battlefield 4

The RPK-74m is a cool weapon, but not because it is the best at anything, or the sum of its parts make it exceptional.


The RPK-74m is cool because it one of the few weapons in the game with a wood stock, and I like traditional weapons.  Because of its wooden furniture it looks more like a traditional AK-47.  I'm not sure why there are no AK-47s in Battlefield 4.  The AK-47 is one of the most widely used guns in the world, and that will continue for many decades.

The RPK-74 isn't really much of a light machine gun in the game.   It is really just an assault rifle for the support class, but an assault rifle with a large 40+1 round magazine.  It pretty low rate of fire at 600 rounds per minute.  One nice thing about this gun in the game is the iron sights.  The front post is thin and really helps line up long range shots. 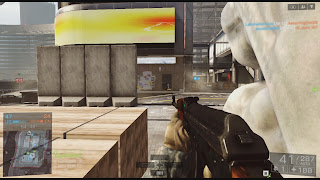