The Cryopod and Cryofirdge have just received some updates in Ark Survival Evolved that make it much easier to see what dino is inside, and its stats.  The cryopods are somewhat controversial among some because they make certain aspects of the game much easier, too easy for some.  A recent poll on my Fat Frogs Swamp youtube channel shows most of the respondents like the cryopods a great deal, but 5% think they broke the game. Cyro sickness, explained below, is one of the ways the devs have tried to balance the cryopods in Ark. 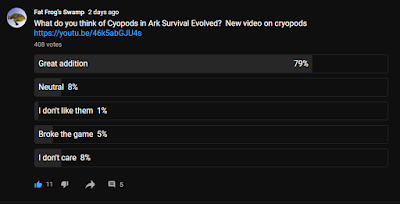 Crafting Cryopods
Cryopods must be crafted in an obelisk, loot crate, supply crate, or tek replicator.  You will need to be level 51.
Cryopod resources

25 Crystal
15 Electronics
225 Metal Ingots
60 Polymer or Organic Polymer
Cryofridge spawn command cheat gfi CryoFridge 1 0 0
Cryosickness
After you release a dino from the cryopod there is a sort of buffer period that lasts 500 seconds.  If you release another dino(s) during that time the creature will experience cyosickness, which puts them to sleep for a long time, making them very vulnerable to wild dinos and hostile players.
My gaming PC and recording gear